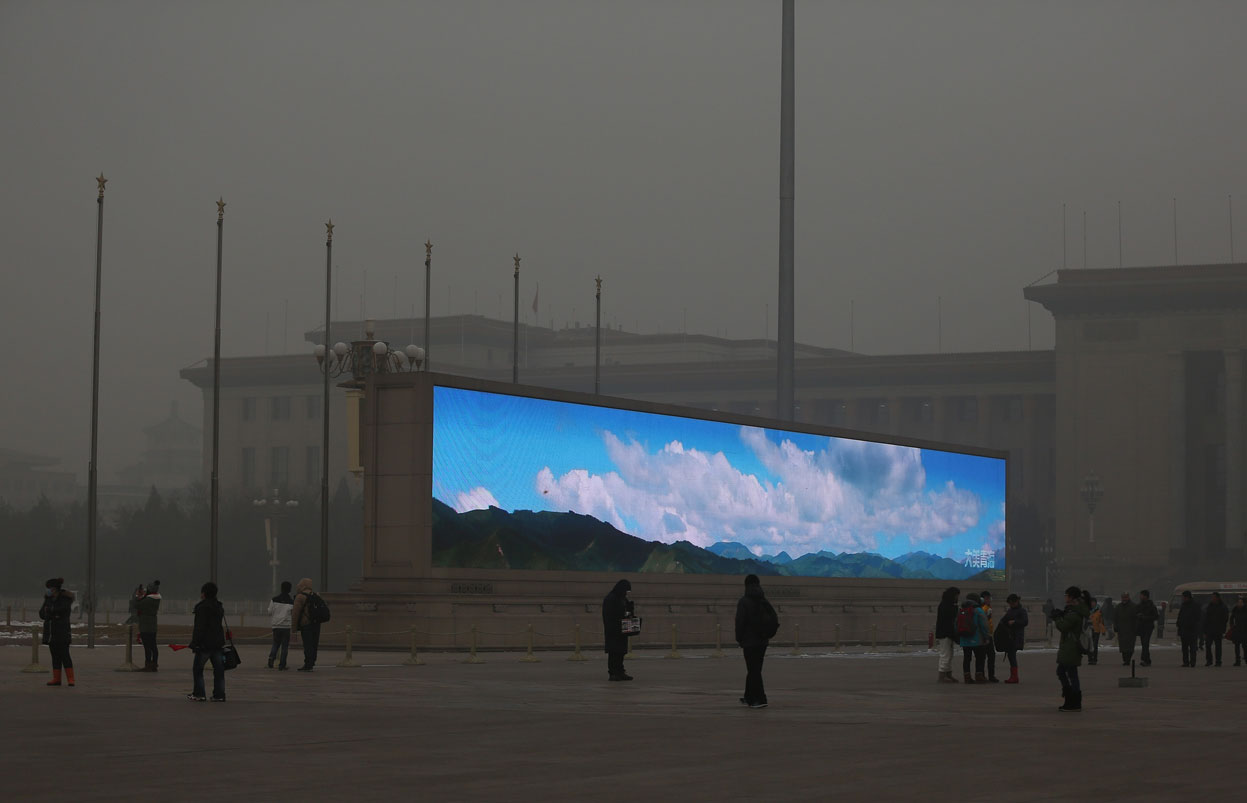 The sky above the port was the color of television, tuned to a dead channel.

The air beyond the window touches each source of light with a faint hepatic corona, a tint of jaundice edging imperceptibly into brownish translucence. Fine dry flakes of fecal snow, billowing in from the sewage flats, have lodged in the lens of night.

William Gibson, one of my favourite authors and Canadian by choice to (a)boot, is sometimes referred to as a "noir prophet" for his work in the genre of "cyberpunk." His excellent writing is ill-served when filed away as 'just' science fiction—for instance, right before that quote from Virtual Light is the very clever line, "business as usual, world without end."

In both novels, a description of the physical atmosphere is key to the dystopian setting, and while he writes about Tokyo and Mexico City respectively, the words (maybe excepting "fecal flakes") could well apply to Beijing. The city's infamous air pollution both touches on the research that brings me and the experience of living here—less dramatic and more immediate than fiction.

A lot of ink has been spilled over Beijing's air quality; you can read these these articles or look at these photos for a general introduction. Personally, I felt a real shortness of breath when I arrived in late February. Jet lag, hanging around in smoky cafés, and a cold I picked up on a crowded Line 13 subway all contributed, but so did three of perhaps five or six "Beyond Index" (or "Crazy Bad") days that have occurred in the past two months."1 I missed the January "airpocalypse" that is the subject of the In Focus photos.

Cycling around or climbing several flights of stairs made the effect more noticeable, and I soon developed the habit of checking the AQI before I left the house, and throwing on my handy N95 respirator if necessary. We also bought an air purifier and sat around it in the conference room.

In mid-March, central heating is turned off almost everywhere, regardless of the temperature.2 I bundled up to go to bed, wore a hat in my apartment, but also noticed that the frequency and severity of very bad AQ days seemed to lessen, perhaps as coal burning decreased. Days with high winds often also had "Good" AQI—although a couple of times the winds also brought sand and grit from the Gobi Desert over the mountains to the northwest of Beijing and a sky that was more brown than grey.

Writing and talking about the pollution is hard, because it is easy to fall into the terms we use to discuss the weather. The difference—perhaps the critical difference—is that, unlike the weather, the pollution has entirely human origins. These are a subject of active research, but attention from scientists is different from the everyday or popular awareness that drives policy. No one is responsible for a stretch of cloudy days, but many are responsible for the haze, so it's important not to conflate the two.

A rough summary of the science: some of the PM does not enter the atmosphere in the same form it enters the lungs of Beijingers, but is the result of chemical reactions. The "precursors" of these reactions can come from a variety of sources—especially factories, electric power plants…and vehicles!—and will be carried around by the wind and weather. What's breathed in Beijing may have come out of a tailpipe in Tianjin, which makes addressing pollution an especially sticky problem even after governments decide to do it.

My small role in this involves modelling transportation activity in each of China's provinces. We can use this together with atmospheric transport/chemistry models3 to estimate how much, for instance, cleaner or fewer auto emissions in Beijing would affect the air, both nearby and far away. We can also connect this to the health impacts of pollution, which are considerable. A WHO study called the "Global Burden of Disease" lists ischemic heart disease, stroke, chronic obstructive pulmonary disease, lower respiratory infections and lung cancer among the top 8 causes of death in China in 2010,4 and attributes 1.2 million annual deaths in China to these and other diseases related to air pollution. There's a number to make you catch your breath.

Family and a couple friends have asked if I'm worried for my own health—I am not. Besides being young, healthy, rich enough to afford masks, air purifiers, etc., I am only a visitor. While research will certainly bring me back, I didn't grow up breathing the poor air, nor will I have to (unless I choose to) I am old and infirm. Enough time spent in the clear air of Toronto or Boston should spare me most of the risk.