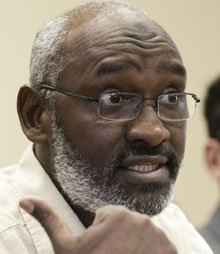 He's one of ~36 reasons to not vote Conservative in the May 2 general election. Yesterday was the F-35.

I'm short on time, so this will be a brief post; but it introduces a theme that I can expand on later by talking about Suaad Hagi Mohamud and Omar Khadr. The Wikipedia article (link above) provides a good overview of what happened to Mr. Abdelrazik, so I won't bother with paraphrase.

There are some unsurprising things in his case. One is that the Canadian Security Intelligence Service (CSIS) and the U.S. Federal Bureau of Investigation (FBI) were overzealous and acted thuggish, saying things like, "You'll never return to Canada!" Pure, unadulterated Hollywood cliché.

We expect rigour and thoroughness in our security agencies and personnel, and we might tolerate a bit of zeal for that reason. We don't grant them license to act like cowboys.1 We also acknowledge (even when they won't) that they make occasional mistakes. For example, you might remember the names Abdullah Almalki and Ahmed El Maati (I didn't) and I really hope you recall Maher Arar. The experiences of these three occurred before the Conservatives came to power, so the fact that Mr. Abdelrazik was flagged as a "false positive" can't be pinned on them.2 So how does blame attach?

The proper response to a mistake, if I learned anything from my parents, is to apologize, make good the harm done, and learn a lesson about avoiding the same mistake in the future. The government has demonstrably not done any of these things for Mr. Abdelrazik. Worse, it actively denied him diplomatic help. On Sunday, I wrote:

Our Members of Parliament…delegate some of [their] responsibility to the civil service, but [they] are ultimately responsible. So while the hands-off message was delivered by a Department of Foreign Affairs official,3 Foreign Minister Lawrence Cannon is answerable for that action; and for his continued failure to reverse it, reprimand the official, or implement any policy to prevent similar occurrences in the future.

Tomorrow: who cares about CAIRS?