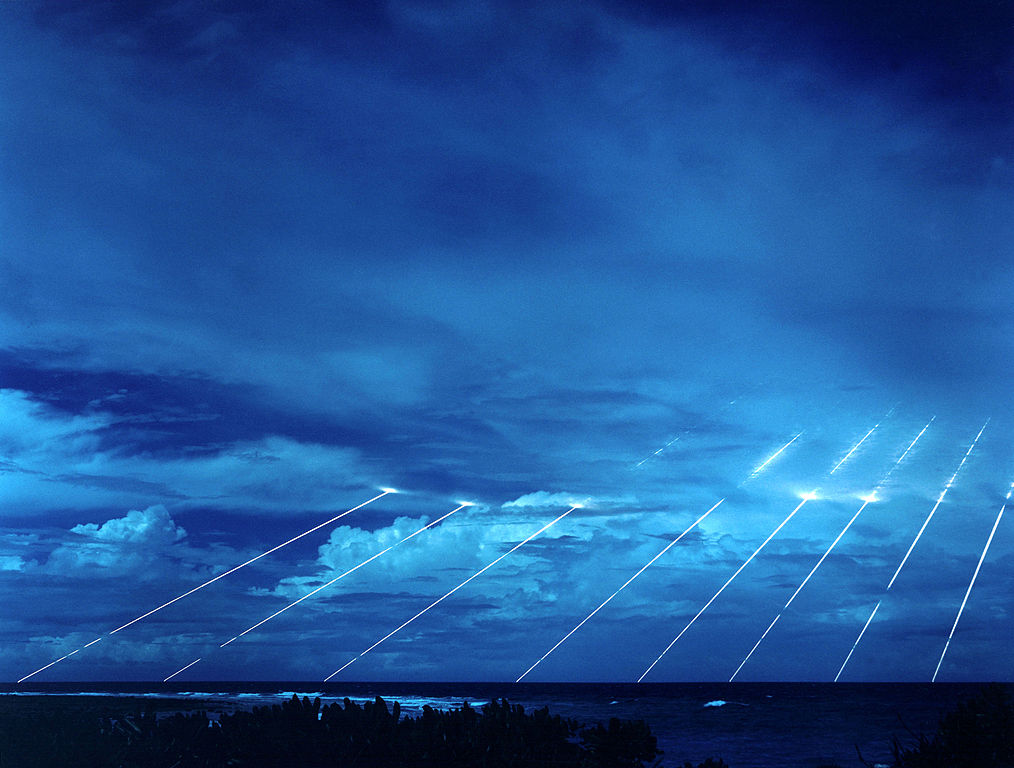 The above photo is of a test of the LG-118A Peacekeeper ICBM, which carries up to ten 300 KT MIRV warheads. Little Boy (the atomic bomb dropped on Hiroshima) rated about 13 KT. What these measurements mean is that detonating 300,000 tons of TNT (a common explosive) or one of these warheads releases equal energy. That TNT would form a solid cube about 20 storeys high. The test warheads were inert (obviously), and dropped on an uninhabited atoll in the Pacific. The bright lines result from the heat created by their reentry into the atmosphere at over five times the speed of sound. If they were live, the next shot would consist of the land and sea being ripped up and flying towards the photographer.

I'm struck by the terrible beauty of the streaks piercing the clouds, a vast Godhand reaching out of the sky to pick up the horizon. I'm reminded of the end of the Evangelion series, and the movie Casshern: 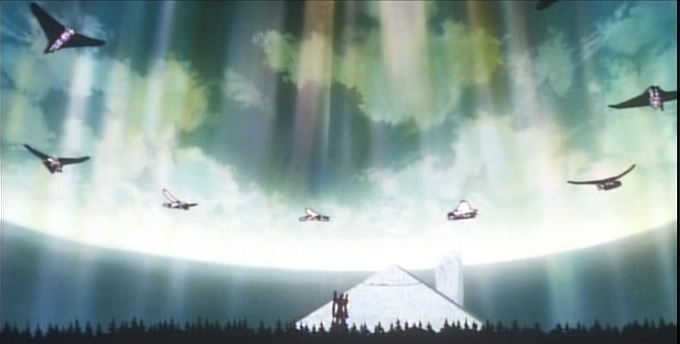 The human body is built for mental comfort. Our eyes are directed downwards, the better to spot whatever's trying to eat us, or ought to be eaten - the sky is out of sight, out of mind. We don't have to contend with how big it is, so usually we don't worry about it, since it doesn't do much besides drip on us occasionally. But every now and then a tall building, a clear sky with clouds in the distance, or a bolt of lightning makes us look up. On such occasions I feel a dizzying sense of scale. It's not that I feel conscious of being small, but rather my mind is filled and strained by the attempt to imagine the unimaginably vast.

… I'm struggling for words - can you tell? My thought is this: at such times man cannot feel relaxed or content - in fact we're more likely to be agitated. Then it shouldn't be surprising that the most powerful gods in Norse and Classical mythology are those of the sky and thunder. We can't conceive of being subject to phenomena of mindbreaking size utterly at random.

Now man has the ability to dispense death from above, either nuclear or kinetic (a metre-wide sphere of metal simply dropped from 20 km has 0.5 KT of energy). I think the most sensible thing to feel when looking at the reentry photo is irrational terror. When I was younger I had occasional nightmares about lying in bed at night, looking out the window while some adult voice spoke calmly to me in a low tone. I somehow knew that, out beyond the horizon, a vast and terrible thing extending up into the sky was peeling civilization off the face of the Earth, and that it was coming towards me. But the worst bit, the part that would wake me up shivering, was realizing the owner of the voice knew about the thing, was responsible, but was entirely unworried by it.

Anyway, I'm against nuclear weaponry of all forms. Let the vastness of the sky be incomprehensible yet benevolent, and not an arena for man's quarrels.